The continued transition of the economy toward online shopping has created an incredible need for new distribution and fulfillment centers. The material handling equipment in an increasing number of those centers is supported by platforms and mezzanines designed and manufactured by Steele Solutions Inc., which has positioned itself for further growth through major investments in people, technologies, processes and equipment.

When Steele Solutions was founded in 1996, Amazon was only two years old and did not have a distribution center of its own. In 1997 it opened two centers with a total of approximately 300,000 square feet of space. Steele Solutions designed and manufactured large platforms for both of those facilities. Now, in 2018, Amazon has more than 325 facilities in the U.S. with a total of 122 million square feet of space, according to MWPVL International, which tracks the company’s facilities. MWPVL said Amazon has another 33 facilities pending.

Within all that square footage are a lot of conveyor systems that are supported by steel platforms, and that need crossover bridges and access catwalks for personnel.

And that’s just Amazon. Add FedEx, UPS, Walmart and a host of other retailers, parcel delivery services and manufacturers, and you have a tremendous need for the steel structures that Steele Solutions designs and manufactures.

“We saw how e-commerce was driving change in the distribution and fulfillment world,” O’Neill said. “And we knew the infrastructure needed to handle the demand wasn’t there. Part of that need was evidenced the last few Christmas seasons when shippers struggled to deliver packages on time.”

Steele Solutions had expanded its facilities and added staff to meet the rising demand in the past, but a point came when the owners realized they needed to make a much greater investment to properly serve customers and better serve the market. Existing customers confirmed that opportunity existed.

“As we planned our expansion, we consulted with key customers,” O’Neill said. “We wanted to let them know what we were doing to meet their needs, and to make sure what we saw in the market was what they were experiencing as well. We talked a lot about capacity, and they saw the additional facility we were considering as a strong positive.”

Steele Solutions’ expansion project – it’s really more a process than a project – began in 2017 with the opening of a second facility in Milwaukee that nearly quadrupled its space for engineering, manufacturing and shipping.

“Our 80,000-square-foot space was at capacity, and we had already expanded to the maximum footprint at that location. We found a 230,000-square-foot facility that would give us the space we needed immediately and room for continued growth,” O’Neill said.

It wasn’t just about space. 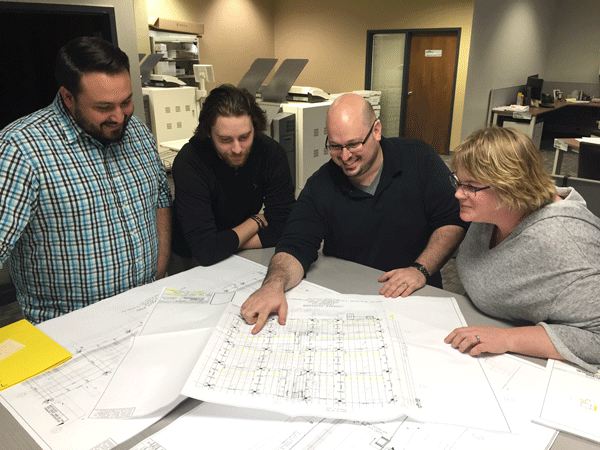 “We needed different equipment, assurances from our vendors, new processes, and lots of people.” O’Neill said.

Through a major hiring initiative, the company more than doubled its staff numbers, and is still hiring.

“We’ve faced a very tight labor market, but we’ve been able to attract great people to our team,” said Lisa Rosewitz, Director of Human Resources for Steele Solutions. “People see the opportunity here, they see our designation as a ‘Best Places to Work,’ and they want to part of a fast-growing company.”

In a testimony to company culture, referrals from existing employees regularly fill open positions at the company, Rosewitz noted.

While more people were needed in engineering and production, greater efficiencies were needed, too; technology offered a lot of that. 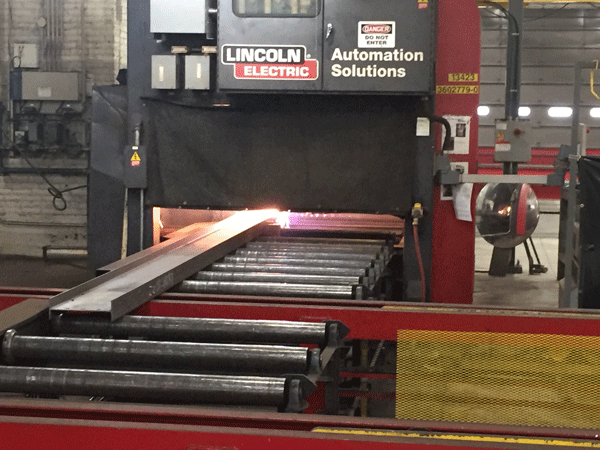 “We invested in technology and we found ways to use existing technology more wisely,” O’Neill said. “For example, we’re making far greater use of the capabilities of the Tekla building information modeling software for designing structures than the norm for such software. Our engineers and technical services team have been incredible in rising to meet the challenges of fast growth.”

Because of the efficiencies and greater productivity in engineering, design books are available for the production department much earlier. That means production has more time to make sure materials are available to complete a project on time.

The increased capacity and improvements in the efficiencies of pre-production processes has allowed Steele Solutions to double the number of projects that can be accomplished each week, while assuring the quality of the work.

Other areas of the process have been formalized. For example, when trucks are loaded with finished parts, everything is counted and photographed, and the truckload is then again photographed with the protective tarp secured. “Things like that enhance accountability, and help us resolve issues that might arise after delivery,” O’Neill said.

New equipment includes a PythonX robotic plasma cutting system that automates cutting, coping and marking of steel sections. It also allows Steele Solutions to bring in full sections of steel, rather than having vendors cut to specific lengths. A second powder paint line greatly speeds up the time it takes to coat steel.

Company owners also knew they had to adopt procedures that weren’t necessary when it was smaller. And they realized as owners, they needed to spend more time “on the business than “in the business.” To that end, Steele Solutions recently hired Perry Pabich as Chief Operating Officer – a new position in the company. “We knew we had to spend more time on our strategic approach to the market, and less time on the minute-by-minute operations,” O’Neill said. “Perry has tremendous operational experience. In the short time he’s been with us, he’s already identified areas we can improve on to gain operating efficiencies.” [Read more about Perry Pabich.]

Additionally, the deep industry knowledge held by the three owners, O’Neill, CEO Michael Thelen, and Vice President of Engineering Terry Young, and other industry experts in the company, is being institutionalized “We’re moving away from tribal knowledge,” O’Neill said, “and developing repeatable processes that aren’t dependent on any one person’s knowledge.”

Gearing Up to a New Level of Business

As with many expansion projects, opening the second location presented some unexpected situations, such as delays in delivery of new equipment that created production challenges. “We scheduled some work assuming the new equipment would be on hand and ready, but it wasn’t,” O’Neill said. “But we faced our challenges head on, knowing we could overcome them.”

As good as the staff was, a greater sense of urgency was needed, O’Neill observed.

“The volume of business was becoming so much higher, we just had to have a different way of looking at our processes, and we had to have more urgency in our approaches,” he said. As an example, the company now considers that meeting a deadline for completion of structure designs is passable, but the real goal is to get them done much earlier. “Those are the accomplishments we strive for and celebrate,” O’Neill said. “It’s a switch from ‘I have to get this done because the deadline is looming’ to ‘I can get this done now’ mentality.”

It’s a renewed focus on serving customers that Steele Solutions has long been known for.

“When a distribution center is planned, the equipment platforms are usually the last thing designed, but they are among the first things needed,” O’Neill said. “Systems integrators who equip distribution centers rely on us for reliable delivery of structures that are designed and built correctly. We can’t be the reason for delays. Timeliness and flexibility have always been big parts of our secret sauce. We lost some of the sense of urgency and flexibility as we were getting our new facility operational, but we are back to full strength. Our teams are operating at peak level, and our processes are far more efficient. The secret sauce vat is full. We are committed to keeping it full, we continue to put new processes in place, and our employees are thriving at our new level of business.”

Steele Solutions primarily works with systems integrators – the companies that equip new or upgraded distribution centers. But the company also partners with equipment distributors for the design and manufacture of mezzanines and work platforms in the material handling sector. That sector’s trade association – MHEDA (Material Handling Equipment Distributors Association) named Steele Solutions a “Most Valuable Supplier” in both 2017 and 2018.

The company also is active in MHI, the nation’s largest material handling, logistics and supply chain association. Along with helping guide Steele Solutions through its expansion, O’Neill is serving as vice president of the MHI board of directors this year. MHI presents the industry’s annual major trade shows, ProMat and MODEX.

Growth Has Been Organic

Growth for many corporations often comes via acquisitions or new products. But at Steele Solutions, the growth has been organic – all from building equipment platforms the company has always focused on. Lately, that expertise has caught the attention of markets other than material handling. In the past few years, those “new markets” have become a greater source of business.

“It was a logical path, since we had the engineering expertise and the experience with steel structures,” O’Neill said. “The non-material handling part of our business is growing very well; we are finding more areas of opportunity. People in those markets like that we offer both engineering and fabrication. It’s common for an engineering firm to design a structure and then a fabricator would build it. By combining those services, we bring efficiencies and quality control.”

Growth plans remain aggressive. “It’s the norm for us,” O’Neill said. “We’ve grown tremendously, and we intend to sustain that growth model by continuing to invest in our people, technologies, processes and equipment to keep us in the forefront.”

This website uses cookies to improve your experience while you navigate through the website. Out of these, the cookies that are categorized as necessary are stored on your browser as they are essential for the working of basic functionalities of the website. We also use third-party cookies that help us analyze and understand how you use this website. These cookies will be stored in your browser only with your consent. You also have the option to opt-out of these cookies. But opting out of some of these cookies may affect your browsing experience.
Necessary Always Enabled
Necessary cookies are absolutely essential for the website to function properly. This category only includes cookies that ensures basic functionalities and security features of the website. These cookies do not store any personal information.
Non-necessary
Any cookies that may not be particularly necessary for the website to function and is used specifically to collect user personal data via analytics, ads, other embedded contents are termed as non-necessary cookies. It is mandatory to procure user consent prior to running these cookies on your website.
SAVE & ACCEPT